Make Your Mark - And Leave A Legacy

Creating a dairy legacy is just what Scott Brothers Dairy in southern California is all about. Today, the operation is home to 1,100 Holsteins on the family’s 900-acre ranch. As the dairy weaves a legacy through each pillar of the pledge, it’s that same legacy that cultivates the mind of fourth-generation dairyman Brad Scott whose local and national networking helps him share his dairy story.

The path Brad Scott walks for the industry is truly one his grandfather mapped out decades before him. Originally from Waterloo, Iowa, Scott’s great-grandfather journeyed to California in 1913 in a rail car with a couple of Jersey cows. First located near Pomona, the operation today is headquartered in San Jacinto, while its creamery is in nearby Chino. Scott is especially proud of his family’s centennial heritage in the dairy business.

“Being fourth-generation means the ones before me did a lot of work, and now the responsibility is in my hands to keep this operation going forward,” Scott says.

Because his grandfather died at a young age, Scott had little opportunity to realize the dairy legacy created for him until he got involved in the industry. Taking part in organizations such as Farm Bureau and the California Beef Council have brought Scott full circle.

“People that knew [my grandfather] have told me that he was one to get involved, go to meetings. He wanted to be in the forefront,” Scott says.

Stepping out of your comfort zone and taking time to play a small or big role in organizations and educational events is paramount to creating your dairy legacy.

“It comes full circle when you’re part of the community instead of just being a business people drive by,” Scott says. “I think the community and the organizations see you as somebody who is part of them and not just somebody they don’t know.”

Networking with others on local, state and even national boards has helped Scott see the big picture of the dairy industry. “The legacy goes beyond the actual farm,” he says. “It’s how you are involved and participate in your local community. What are you going to be known for?”

Dairy operations have a stake in local communities, in organizations and even in government. The Scotts themselves are challenged by tough environmental regulations and high costs of production. But they work to stay a step ahead through an on-farm structure that converts cow manure into diesel fuel.

Dairy farmers have got to continually work together and learn from each other’s successes and failures.

“Working with other fellow agriculturalists is probably one of the things that I find the most beneficial to the industry,” he says.

The milk produced at Scott Brothers Dairy is shipped to the dairy’s creamery where frozen yogurt, sour cream and other dairy products are created. This leaves a robust economic impact on the local community through the jobs and products it generates.

Beyond providing jobs, efforts to recognize staff and create a successful work environment help ensure positive employee relations in the Scott Brothers Dairy business. Even television’s “Undercover Boss” program featuring Scott Brothers Dairy illustrated in an episode how the Scotts and their employees resonate with consumers, and even CEOs.

Scott’s local involvement helps his community “put a face” on the family’s operation. “[People] see your dairy operation, but when they get to ask you the questions, or if issues come up, on animal care or sustainability or the environment, you get an opportunity to talk with [them] about what you do,” Scott says. 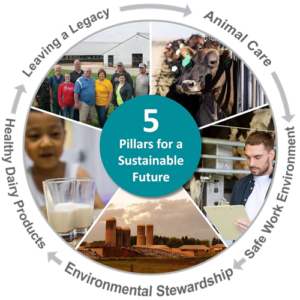 He recalls a one-on-one conversation he had with a young boy earlier this year at the Orange County Fair in California. A vegan, the boy was adamant about dairy being bad for the environment and unsustainable.

As Scott shared information from the industry’s Undeniably Dairy and Dairy Good campaigns, he realized the boy’s actions were the result of hearsay. The encounter was a real aha moment for the dairyman.

He says, “Getting involved in the industry and in my community is priceless.”

Though it’s unclear, today, the exact path his teenage daughters will take in life, Scott says their interest in agriculture and the dairy industry shines through their enthusiasm. Both are active in the National FFA Organization. And one of his daughters had an idea to create a Facebook page to educate people about Scott Brothers Dairy. So, she shared it with her father and has been posting on the page ever since.

“They’re really excited about what agriculture stands for; telling the story; [and] being involved; doing what they can in leadership,” Scott says. “They are passionate about what is here, what it means to come from an ag background. I can understand the history, the legacy of what’s been built here, and realize that they’re next in line to maybe take on that challenge.”

Programs like FFA’s New Century Farmer help young people develop careers in production agriculture. New Century Farmer is an intensive five-day conference that helps participants ages 18 to 24 network with industry experts, presenters and each other. The program also helps attendees learn about the global marketplace, farm financing, consumer trends and managing risk. Scott encourages YOU to be openminded and aware of what’s happening in the industry, and to step outside the barn once in a while.